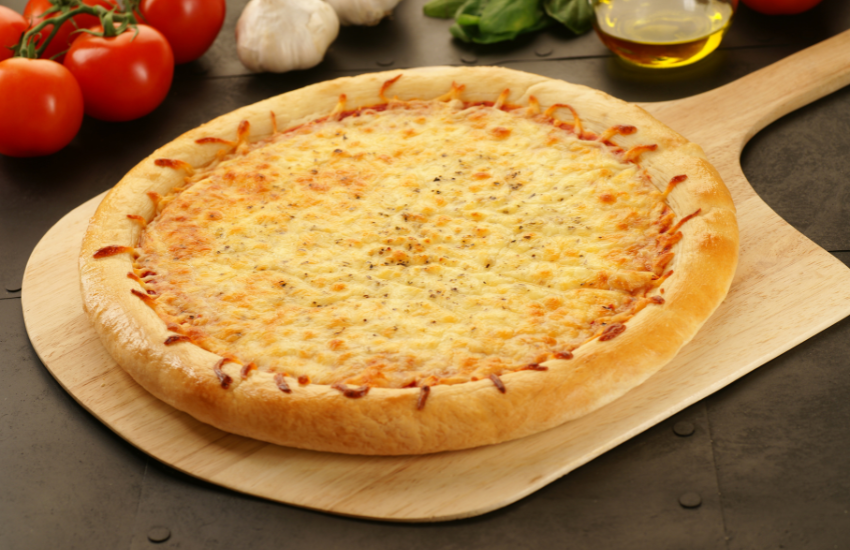 Have you ever had Pizza Bianca? If you’re a pizza connoisseur, you might’ve come across this name. Pizza Bianca is white pizza. It’s spread with ricotta cheese and parmesan cheese mixture instead of the usual tomato sauce.

In Rome, bakeries or pizza shops sell Roman white pizza as large slabs of golden flatbread drizzled with a bit of olive oil. It’s a staple food of Rome consumed throughout the day, whether day or night.

Although it’s called white pizza, it’s closer to being a type of bread than what people traditionally consider pizza.

Where Does Pizza Bianca Originate From?

Pizza Bianca originates from Rome’s bakers, who, before they baked their loaves of bread, put a small piece of pizza dough into the oven to test the temperature. They make the dough from flour, yeast, salt, water, and extra virgin olive oil, leaving it to rise for hours or days, much like a traditional pizza.

Once proven, they stretch the dough, top it with cream and cheese, and put it in the oven to bake.

What’s the most critical difference between pizza and pizza Bianca?

The most significant difference between average pizza and pizza Bianca is that on a standard pizza, we put tomato sauce on it, but many people don’t like tomato sauce. On pizza Bianca, there isn’t any tomato sauce; instead, we top it with cream or white sauce.

A perfect substitute for those who hate tomato sauce-like, my brother!

Another big difference between the two is the place of origin. We all know pizza originated in Naples, Italy, but pizza Bianca is a staple dish of Rome!

How Can you Make Pizza Bianca at Home – White Pizza Recipe

Okay, now you know what pizza Bianca is and how it originated. Despite that, the big question remains… How do we make it? It’s not that hard; it might even be easier than the standard Neapolitan pizza.

Although it may be a staple dish of Rome, Italian pizza maestros make it well. You can find many white pizza recipes, yet the one you choose has to be authentic. Below we’ve got you the authentic pizza Bianca recipe.

The most vital part- the homemade pizza dough

You’re making the pizza Bianca with a potato topping, so you must make the yummy potato first!

This is an essential part of your pizza Bianca, a unique ingredient to help give it the best taste ever!

This is another critical step. It’ll give your pizza a fantastic taste.

Everything is ready, and we can combine everything to make the pizza Bianca.

Few words about the baking temperature and preheating

You must know that the perfect temperature to bake a pizza is 626 degrees Fahrenheit. Most conventional ovens can’t reach such a high temperature, so you’ll need a hot pizza stone. Set your temperature range to the highest temperature and preheat the pizza stone for about an hour.

It needs to be super hot for the pizza to cook perfectly.

Adding the toppings and baking

As we already know, the most significant difference between a regular pizza and pizza Bianca is that pizza Bianca doesn’t have any tomato sauce.

Note: When cooking bianca pizza in an electric oven, pre-cook the pizza crust for 5 minutes, and then add the toppings. The reason is, unlike Neapolitan style pizza, pizza Bianca has many toppings which can slow down the dough cooking process, and resultantly you can have a hard crust.

Also note that, since your bianca pizza has heavy toppings, you can also set the stretched pizza dough in a cast iron skillet or rimmed baking sheet and then add the toppings, it’ll save your pizza from breaking when you stretch it on the pizza peel.

Remove the pizza Bianca from the oven with the peel. Always wear protective gloves so you don’t hurt yourself. You can top it with a wild rocket before serving too. Get ready to have the best pizza Bianca ever!

What are Different Toppings You Can Use on Your  Bianca Pizza?

You can use different toppings on your pizza Bianca, such as fresh or grilled veggies like mushrooms, or cauliflower, as long as there aren’t any tomatoes. You can even add salami or some sort of meat if you love it. Just remember not to use tomato sauce!

You can substitute the cheeses in this recipe with your favorite cheeses, such as cheddar cheese or even blue cheese if you’re feeling adventurous! If you want a different taste, you can even use Alfredo sauce instead of the Bianca sauce!

How do you store pizza Bianca?

If you have any leftovers, which, trust me, you won’t have, you can wrap them up and store them in the fridge. You can heat it up again either in the microwave or in your oven. You can even freeze it. You’ll have to defrost it thoroughly in the fridge beforehand, though!

Can I use plain flour for the dough?

It’s recommended to use 00 flour, but if ‌it’s unavailable, then you can use regular bread flour too. It has a lower protein content so the texture will be slightly off compared to 00 flour. Higher protein content makes the gluten sit better and be more developed.

What hydration dough should you use for pizza Bianca?

The best hydration for pizza Bianca is the same as any other pizza. You can use 60% hydration, 70%, or even 80% hydration dough for your pizza.

If you ask me, 70% is the best hydration for pizza dough as it isn’t too hard and dry and easier to work with than the super soft 80% hydration dough.

Pizza Bianca is a roman recipe, whereas pizza Focaccia is a recipe originating in the north of Italy. There isn’t much distinction between the two, just that pizza Focaccia has a spongier and breadier dough compared to pizza Bianca.

How should you eat Pizza Bianca?

Romans eat pizza Bianca whenever they want during the day, it’s mostly considered a snack, and it’s cheap. It’s usually given to young children as a mid-morning snack or school lunch. Some people even split it in half and eat it like a sandwich, much like a calzone!

In Rome, people even eat pizza Bianca as a dessert! Wanna know how? Well, they fill their sheets of pizza Bianca with sweet stuff such as Nutella! Weird, right? But you won’t know how it tastes until you try it!

How do you know your Pizza Bianca is fully baked?

One sign that’ll tell you that your pizza Bianca is baked is that after some time the white sauce and the cheeses on top will start bubbling and boiling, which means it’s ready!

How can I prevent soggy Pizza Bianca?

Soggy Pizza Bianca is usually the result of the mozzarella being fresh and leaving water. You can combat this issue by breaking up the fresh mozzarella and wrapping it up in paper towels for up to an hour.

You can even use slices of mozzarella instead of cubes. It’ll release all the excess water. You just need to slice up the mozzarella, put it into a sieve, and leave it for a few hours.