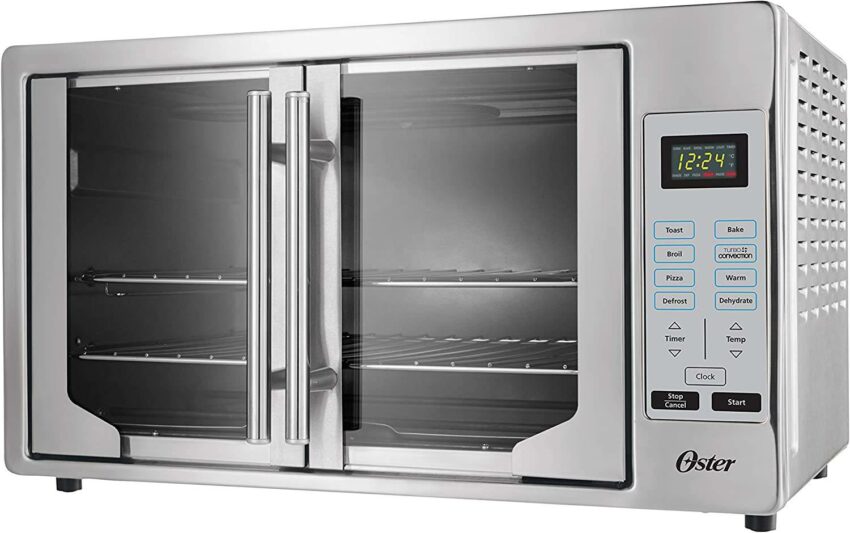 I don’t know about you, but the smell of freshly baked cookies out of the Oven is such a hit of nostalgia for me. Many people avoid large ovens as they take up considerable space in the kitchen, and some others don’t even need such a huge oven.

Are you thinking whether the Oster French Convection Oven can be a fantastic solution for all your baking needs?

Is it a good value for your money, and is it reliable?

Hopefully, by the end of this article, you’ll be well-versed in the features of this Oven and have a solid mind made up on whether it’s worth it for you or not.

The Oster is marketed as an XL oven, and you’ll notice it’s colossal! It’s not just a toaster oven; it’s a monster! This convection toaster oven has a giant interior that’s big enough to toast 14 slices of bread, two 16-inch pizzas, and even a family-sized chicken!

When an oven is this big, the cooking times are also bound to be super long; therefore, some technology must be employed to reduce the overall cooking time. For this purpose, a fan inside the convection oven sends the air around inside the oven all over the food, leading to rapid cooking and perfect doneness.

The design of the Oster French Door Oven is pretty attractive; however, many people want a functional product; this Convection oven is perfect as it goes nicely with other stainless steel appliances.

It doesn’t bring down the value of your kitchen because you have something so prominent on the counter! The Teflon coating allows it to be cleaned quickly and, paired with the digital display, gives it a clean and modern look.

The French doors also add to the design, as they look like something from a professional kitchen! It also makes the Oven more attractive to help you see inside while baking.

It also comes with a crumb tray at the bottom, and you can easily detach it to clean it or wash away the crumbs.

This circulated air results in sinking the cold air and making the air less dense so that it heats up quicker, thus cooking your meal perfectly!

According to the company, you can make two 16-inch pizzas at once with the help of this Oven. It’s big enough even to slow-cook a 3.5lb roast!

Oster certainly packed this Convection oven with loads of features. It has seven cooking functions: Toast, Bake, Broil, Pizza, Keep Warm, and Dehydrate; you can easily select any setting in no time using the touch buttons on the side.

After using this convection oven in the kitchen, the things that stick out after trying it out are that it can fit two 16-inch pizzas. Other than that, you can also accommodate two 13×9 baking pans inside it.

You can even cook with a cast-iron skillet inside it! Therefore, the company wasn’t lying about the size at all!

Besides the timer, you can adjust the temperature to a max of 450 degrees Fahrenheit and a low of 150 degrees Fahrenheit. The turbo convection button circulates hot air inside the oven with the help of a fan, and after using it, we can say that it works pretty well.

The warm feature is another handy function, if you’ve got a big party and you need to keep some dishes warm, you can put them inside with the warm function, and it’ll do the job for you. The dehydrate function also works pretty well.

Pizza works at 400 degrees and has a 20-minute default, you can’t change the temperature for it, so if you have a different recipe, you can use the bake function.

Now, look at the toaster function; the max setting is 6. While it toasts the bread evenly and consistently, there is one issue; we don’t know how long each set takes, so you’ll have to learn that by trial and error.

Another super handy thing you can do is change the temperature and the timing on the fly. It doesn’t have an auto-pause function when you open the doors, though.

When you’re cooking in an oven, memory is an important feature. After canceling, you might change your mind and want to restart it or note down the time and temperature for any future bakes.

Unfortunately, this Oven doesn’t come with memory. Once you cancel it and power it up again, the temperature and the timer will reset to the original value.

With the pan that comes with the Oster oven, you can do many things. When baking something that might drip, insert the pan underneath the tray, so the drippings fall onto the pan. If you’re cooking something liquid, put it in the baking pan on top of the tray.

Turbo Convection and Clean up

Although this oven is enormous and has intense, powerful fans, it’s still silent, which is a massive plus in the kitchen. The lights inside help you to see inside whenever the Oven is on. You can keep an eye on your food to see how the baking process goes.

This Oven is not self-cleaning, but it’s made of galvanized metal; you can clean it up with ordinary household soap and water.

There are two polished, ergonomic handles on the doors. The doors are designed so that a single door pull causes the other to open automatically. It’s a nice feature that allows you to open both doors with just one hand.

Some buyers have complained about the doors suddenly closing in on them, causing them to get burned. This is caused when you don’t open the door entirely so that the spring lock system engages. Therefore, always remember to open the doors so that they auto-lock fully.

Some buyers have also complained of the door glass bursting; again, this is not a manufacturing fault. Over time, the doors develop micro-cracks from minor hits and bumps, with the heat causing the glass to expand, ultimately forcing it to shatter.

This convection toaster has a 1500-watt power usage.

How do you change between temperature units?

While plugging in the toaster, you must press and hold the temperature button for about three seconds. After that, “dE-C” appears on the screen. When you press the start button, it will change the unit to Celsius.

How much space is there between the racks?

The distance between the two racks in this Oven is approximately 2 inches. You can remove one frame if you need to cook something high.

Is the interior material a health risk?

The interior of this Oven has a non-stick coating, and it doesn’t make contact with your food or vaporize at higher temperatures. It’s just for ease of clean-up; thus, it’s not a health problem. The racks are chrome-plated steel, so there aren’t any chemicals on them either.

How long do you need to preheat it?

Preheating it to the max temperature of 450 degrees Fahrenheit takes around 5-7 minutes, so a general rule of thumb would be to let it preheat for at least 5 minutes.

After reading the review, you must have had a good idea of whether you should buy this convection oven. If you’re looking for a great addition to your kitchen, which will be a good combo of utility and looks, then the Oster French Door Oven is the one for you!